C++/WinRT is an entirely standard modern C++17 language projection for Windows Runtime (WinRT) APIs. For more info, and more walkthroughs and code examples, see the C++/WinRT documentation. A good topic to begin with is Get started with C++/WinRT.

The template for a new Windows console application creates a simple C 'Hello World' app. At this point, you can see how Visual Studio builds and runs the apps you create right from the IDE. To build your project, choose Build Solution from the Build menu. The Output window shows the. Launch VS Code Quick Open (Ctrl+P), paste the following command, and press enter.

Set up Visual Studio for C++/WinRT

For an introduction to XAML, see XAML overview

Our first app is a 'Hello, World!' app that demonstrates some basic features of interactivity, layout, and styles.

Begin by creating a new project in Microsoft Visual Studio. Create a Blank App (C++/WinRT) project, and name it HelloWorldCppWinRT. Make sure that Place solution and project in the same directory is unchecked. Target the latest generally-available (that is, not preview) version of the Windows SDK.

In a later section of this topic, you'll be directed to build your project (but don't build until then).

About the project files

Typically, in the project folder, each .xaml (XAML markup) file has a corresponding .idl, .h, and .cpp file. Together, those files compile into a XAML page type.

You can modify a XAML markup file to create UI elements, and you can bind those elements to data sources (a task known as data binding). You modify the .h, and .cpp files (and sometimes the .idl file) to add custom logic for your XAML page—event handlers, for example.

Let's look at some of the project files.

A first look at the code

As you may know, all of the classes in a Universal Windows Platform (UWP) app written in C# are Windows Runtime types. But when you author a type in a C++/WinRT application, you can choose whether that type is a Windows Runtime type, or a regular C++ class/struct/enumeration.

And here's the basic structure of the implementation of the MainPage runtime class, and its activation factory, as seen in MainPage.h.

For more details about whether or not you should author a runtime class for a given type, see the topic Author APIs with C++/WinRT. And for more info about the connection between runtime classes and IDL (.idl files), you can read and follow along with the topic XAML controls; bind to a C++/WinRT property. That topic walks through the process of authoring a new runtime class, the first step of which is to add a new Midl File (.idl) item to the project.

Now let's add some functionality to the HelloWorldCppWinRT project.

In Solution Explorer, open MainPage.xaml so that you can author the controls that form the user interface (UI).

Delete the StackPanel that's in there already, as well as its contents. In its place, paste the following XAML. 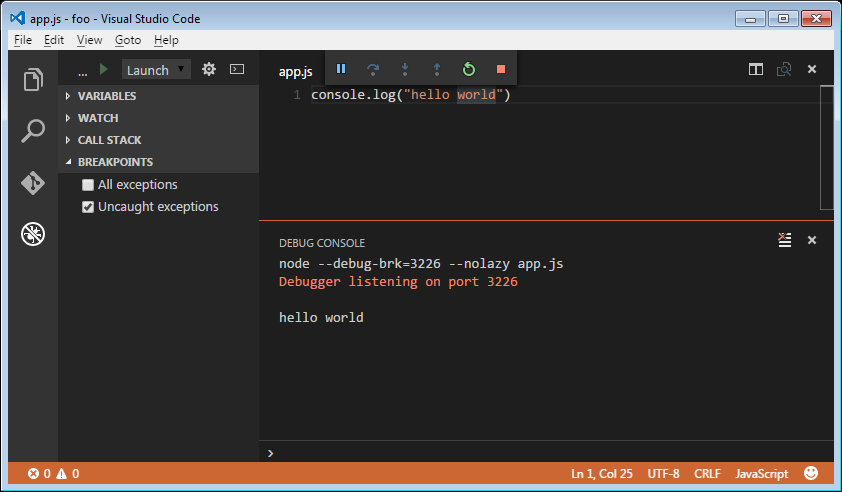 Since we deleted the Button named myButton, we'll have to remove the reference to it from the code. So, in MainPage.cpp, delete the line of code inside the MainPage::ClickHandler function.

At this point, you've created a very basic Universal Windows app. To see what the UWP app looks like, build and run the app.

In the app, you can type into the text box. But clicking the button doesn't do anything yet.

In MainPage.xaml, find the Button named inputButton, and declare an event handler for its ButtonBase::Click event. The markup for the Button should now look like this.

The implementation retrieves the user's name from the text box, uses it to create a greeting, and displays that in the greetingOutput text block.

Build and run the app. Type your name in the text box, and click the button. The app displays a personalized greeting.

It's easy to customize the look and feel of your app. By default, your app uses resources that have a light-colored style. The system resources also include a dark theme.

To try out the dark theme, edit App.xaml, and add a value for Application::RequestedTheme.

A theme is applied when your app starts up. It can't be changed while the app is running.

In this section we'll change the appearance of the text (for example, make the font size larger).

In MainPage.xaml, find the 'What's your name?' TextBlock. Set its Style property to a reference to the BaseTextBlockStyle system resource key.

BaseTextBlockStyle is the key of a resource that's defined in the ResourceDictionary in Program Files (x86)Windows Kits10DesignTimeCommonConfigurationNeutralUAP<version>Genericgeneric.xaml. Here are the property values that are set by that style.

Also in MainPage.xaml, find the TextBlock named greetingOutput. Set its Style to BaseTextBlockStyle also. If you build and run the app now, you'll see that the appearance of both text blocks has changed (for example, the font size is now larger).

Step 4. Have the UI adapt to different window sizes

Now we'll cause the UI to adapt dynamically to a changing window size, and so that it looks good on devices with small displays. To do this, you'll add a VisualStateManager section into MainPage.xaml. You'll define different visual states for different window sizes, and then set the properties to apply for each of those visual states.

Add this block of XAML as the first child element of the root StackPanel element.

Build and run the app. Notice that the UI looks the same as before until the window is resized narrower than 641 device-independent pixels (DIPs). At that point, the narrowState visual state is applied and, along with it, all of the property setters defined for that state.

The VisualState named wideState has an AdaptiveTrigger with its MinWindowWidth property set to 641. This means that the state is to be applied only when the window width is not less than the minimum of 641 DIPs. You don't define any Setter objects for this state, so it uses the layout properties that you defined in the XAML for the page content.

The second VisualState, narrowState, has an AdaptiveTrigger with its MinWindowWidth property set to 0. This state is applied when the window width is greater than 0, but less than 641 DIPs. At exactly 641 DIPs, wideState is in effect. In narrowState, you define Setter objects to change the layout properties of controls in the UI.

This walkthrough showed you how to add content to a Windows Universal app, how to add interactivity, and how to change the UI's appearance.